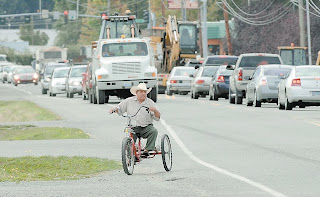 Colville, WA
As the morning sun was rising and people were on their way to work, one man's journey was coming to a sobering end. It was a journey that had started only a few hours before and was scheduled to last for days.

It all started late last night at the Logger Tavern where local patron Ernesto Reyes was in a heated argument with a coworker over who could do more push-ups. The coworker, being much younger, easily won the contest, but Reyes wasn't finished. He then claimed he could ride his recently purchased tricycle across the state, all the way to the ocean.

"Ever since he bought that tricycle, he thinks he's some sort of Olympic athlete, the Mexican Lance Armstrong as he puts it." stated the bartender. "He comes in every night bragging about how far he rides and how much weight he's losing. I haven't seen it, but I have seen him fall off that thing a few times."

As the coworker and several other patrons took up the bets, Reyes set out on his trike, destination; the Pacific Ocean. After only a few hours of riding, Reyes finally conceded the bet when he realized he had only circled the block a few times. Swaying in and out of the morning traffic, he eventually made it home. "I still think I can do it," he claimed. "I just need to get an earlier start in the day."
Posted by m.c. razor at 5:08 PM