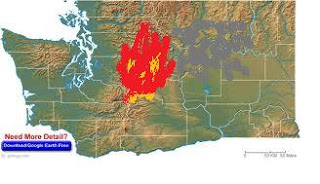 Wenatchee, WAA recent video created by the Washington State Forest Service has sparked off a series of protests in the region of central Washington. The video was meant to provide campers with tips on campfire safety, but once it was uploaded to the internet, fire got angry!
The controversial video showed a forest ranger extinguishing a campfire and exclaiming over and over how stupid fire was and it needs to be stomped out.  Soon after it's release, fire started protesting near Ellensburg and has now escalated to the point where it is threatening the capital of all the hearts of Washingtonians, the mother fucking Applets and Cotlets factory. "This can't happen, please don't let this happen!", exclaimed everyone.
When reached for a comment, all fire had to say was, "Fire mad!"
Posted by m.c. razor at 7:52 PM No comments: