It's on! Gov. Gregoire vs. Green River 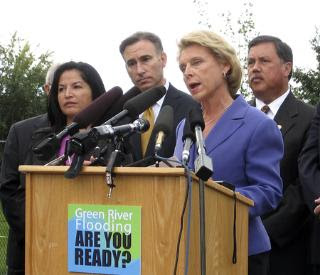 Renton, WA
The rivers in Washington over the last few years have risen into the flood zones, and the Governor this week claimed,"We're not gonna take it anymore!" Standing along with her personal trainers and a river tactics specialist the Governor called for a bare knuckle brawl with what she claims to be her first victim, the Green River. "It's not stopping there," she claimed. "After I take down the Green River I'm coming after the Skagit, and the Puyallup, and I'm not stopping until this shit ends!"
The Green River had no comment.
Posted by m.c. razor at 9:42 AM