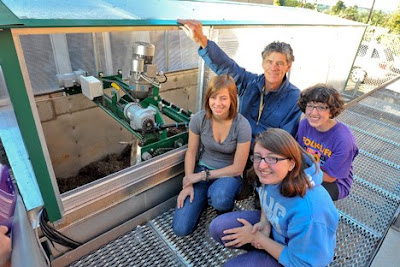 Bainbridge Island, WA
For Greg Utledge and his brainy band of Bainbridge Island High School Physics Club members, this summer marked the realization of a 2 year dream to accomplish the impossible – building an elevated box with a motor inside. “We started this project back in 2007, with little more than a motor and a large box, which wasn’t even elevated. I mean it was just sitting on the ground…empty…with no motor inside of it…if you can believe that!” said Utledge.

The nearly 2 year project involved an enormous amount of work, from moving the motor inside the box, to elevating the box above ground, to finally building a metal ramp to access the box once it was elevated. When asked who she credited with being the single most important team member of the project, Junior Nancy Lewis didn’t hesitate. “Jesus,” she said.

“We’re extremely proud of the work Greg and his students have accomplished,” said Bainbridge HS Principal Mark Davies. “This is a monument to science and a testament to what can happen when you combine a little imagination and a whole lot of teamwork. Not one single member of this institution thought they were serious about building an elevated box with a motor in it. I’m serious. Not one. I still can’t believe they did it.”

Though the group faced their fair share of hurdles along the way, possibly none was more heart-breaking than losing Junior Stacy Kyle in 2008 to a long battle with Rickets. “She was the heart of our club,” said Utledge. I just wish she enjoyed Vitamin D as much as she did science.”
Posted by Clambaker at 3:26 PM