Family excited to see son out of the house 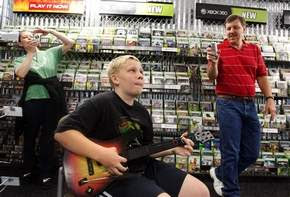 Federal Way, WA
Raising a teenager these days comes with many challenges, but along with them come small victories. That was the case of one couple yesterday when their year long goal was achieved by taking their son to the mall. Tina and Mark Lang bought their son Bobby an Xbox for Christmas last year, and since then he has barely left his room.

"We had thought we tried everything," says Tina. "First we tried starving him out of his room, but he was losing so much weight we got concerned. He wouldn't even go to school so I just started homeschooling him in his room. And I've learned to incorporate things, like from Grand Theft Auto, into learning tools."

It was Mark who came up with the idea of taking their son to the local video game store at the mall. Then, with several applications of sun tan lotion and Gameboy in hand, the family took their first drive together in almost a year. "It's a great day for the Lang family!" Mark exclaims. "Sure it is tough sometimes, but we'd rather have him safe in his room then getting messed up in gangs."
Posted by m.c. razor at 8:14 PM