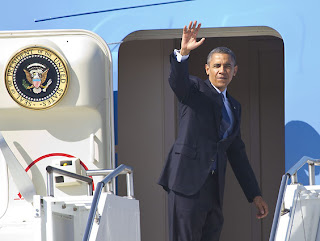 
Seattle, WA
The President stopped by for a fund raising dinner yesterday at the home of the former Costco CEO's house. He held a private dinner for a few guests and no media was allowed to be present. But...thanks to our great make up staff here at The Apple, I was able to attend under the guise of Lenny Wilkens. So the following is a brief recap of what the president and the guests discussed.

First, President Obama came outside to the dining area dressed sharply in a crisp new pair of Kirkland Signature jeans. I couldn't believe how great they look when they are brand new. He sat down and after a little friendly banter he agreed to get down to business. He stated his top priority while in Seattle was to try a bacon maple bar from Voodoo Donuts. "Can you imagine that combo?" he asked. "Bacon on a maple bar, just imagine. Think about it, you have salty bacon with that sweet sweet maple frosting. I bet Mitt Romney doesn't like those. He probably likes plain glazed. He probably cuts a donut in half and tells everyone he can only eat half a donut but in his head he wants the whole thing. I'll eat the whole thing. Heck, if you hand me two bacon maple bars, I'll eat them both. Somebody hand me two donuts right now" Then someone (Greg Nickels) unwisely pointed out that Voodoo Donuts was in Portland and the evening affair was all but over.

The president had three caterers deported and took off with a jet pack.