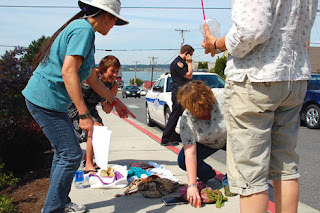 Vashon Island, WA
The recent recession that has swept across the country this year has left no one safe, including islands. Proof of that comes in a recent string of violence this last week on Puget Sound's Vashon Island. The annual Bazaar Days, held the first week in September, usually offers a variety of home-made arts and crafts to the hundreds of onlookers and shoppers, but his year things turned ugly. Due to such low numbers in sales, many vendors took to the street in almost gang-like fashion, harassing and assaulting many of the tourists.

The rampage started around 1:00 pm when soap vendor Lisa Campbell got so fed up with the people walking by and not trying a free sample, she ran from behind her booth and pushed a shopper to the ground. "I've got boxes of lavender bars back here," she yelled. "I've got horses to feed! How am I supposed to pay for that?" That event kicked off a string of attacks, as festival goers were sent racing to their cars.

The local police officer on duty was called to the scene but refused to take any action. "I've never had any sort of formal police training," claims Deputy Jonah Bush. "They just gave me this job because I've never smoked weed, and these women are all hopped up on Chai and wild honey."

Eventually, the situation calmed and the vendors returned to packing up their goods. But for now, Vashon Island remains in a quiet unrest. Patrons are returning to the shops and organic markets, but the tourists are gone. Most people feel it is just safer to get their huckleberries elsewhere.
Posted by m.c. razor at 4:16 PM