Screw you Vashon…and your pies! 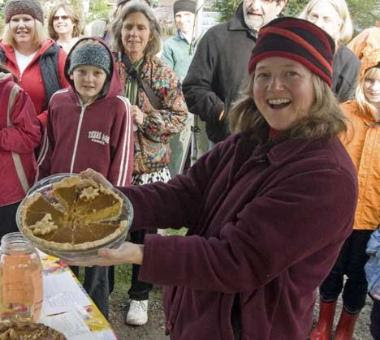 Ugh. You know what, Vashon Island? Nobody wants your pie. Okay, maybe some of the other islanders do, but not us.

And do you know why? Because it’s too fucking good. I’ll admit it…it’s shit-crazy amazing. I let a bite sit in my mouth for 5 minutes without chewing…it literally melted…like an iced cube…well maybe a little more slowly than an iced cube…but the shit melted. (haha I think it’s funny to say “iced cube" instead of "ice cube..." seriously…try it with all of your friends..."would you like some iced cubes...with your soft drink?") Your pumpkin pie makes me want to ignore the rules of conventional society and eat pie for breakfast, lunch, dinner…and sometimes even 4th meal (which I know Taco Bell has rights to, but 2AM pie is so much better).

But you also know it’s awesome…and we know that you know it. Don’t you see how completely lame that is? It’s the definition of “uncool.” And don’t even think about blaming us. YOU decided to move to an ISLAND! AN ISLAND!! What do you have against the rest of us? You sit out there, in your richy-rich rocking chairs, drinking tea, making everything organic, healthy, and tasty, looking down on us, making your delicious pies. Enough already! We get it! You’re better than us!

How the hell did you get ferry service? You'd better be paying for those ferries by the way, because every time I have to get to Southworth I have to stop by your piece of shit island. Every time I think, “God damnit I wonder if I’m paying for this shit."

Give me some pie.
Posted by Clambaker at 9:17 PM No comments: