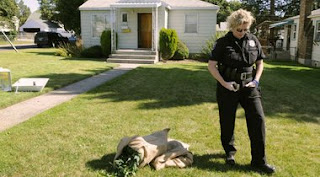 Spokane, WA
For rookie officer Sharon Blake, it seemed like a chance to not only show off her skills as a police woman, but also a chance to clean up the neighborhood. For her fellow officers, it was a just another chance to haze her.

Officer Blake joined the force last September and quickly earned a reputation as a go-getter by busting three river-walk patrons for being in the park after dusk. Later that month, while enjoying a Crunchwrap Supreme at a Taco Bell, Officer Blake overheard a conversation between a few college students claiming they were, "growing enough weed to last them 'til the next Harry Potter movie." Upon relaying the information to narcotics officers, she was informed that they were too busy dealing with "real problems." "I couldn't believe they weren't going to do anything about it," she said. "I mean...one detective even made quotation marks with his fingers while saying 'real problems.'"

Over the next eight months, Officer Blake tirelessly dedicated both her on and off-duty hours working on the case. until she was finally able to acquire all the necessary permits and warrants for an arrest. Early yesterday morning, while on a stakeout, she noticed the students leaving for class and decided it was time to call for back up. When no other officers arrived, she decided to go in alone. Once inside she found two marijuana plants that yielded an approximate street value of $600 worth of pot. She quickly removed the plants and contacted Waste Management officials, who were more than happy to come over and dispose of the weed.

"Others may mock me for some of my actions," she stated. "But what they can't mock is how much safer the city is because of them."
Posted by m.c. razor at 5:48 PM