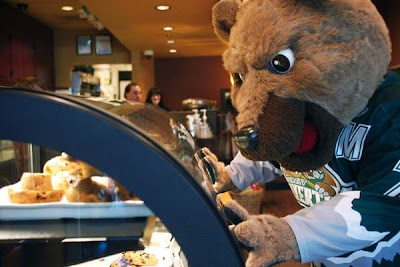 Everett, WA.
When he isn’t leading the wave or giving away t-shirts for the WHL Everett Silvertips, you’ll find team mascot Lincoln at his local Starbucks, attempting to rally the crowd for an entirely different cause…the high price of Starbucks muffins.

As he looks menacingly through the display case, leaning threateningly over the glass, you can almost feel his sense of frustration.

“There they are…yes yes yes…look at them behind the glass…costing so much…god I want to pay less for them,” said Lincoln. “I can’t…I won’t…well maybe if I….fuck fuck fuck.” He then seemed to direct his attention toward the staff. “Hey asshole…how much is this muffin…this apple strudel shit right here. Oh yeah that’s right…too much,” he shouted as he turned around and walked out of the store.

For manager Ted Garrett, Lincoln’s visits have become an all too common event.

“I guess it probably started a couple of years ago,” said Garrett. “He came in one day and ordered a banana nut muffin with a side of honey. When the barista rang him up and told him the price, he just stood there, staring at her. It was unsettling. The expression on his face never changed. Then he drags his paw across his neck like some sort of throat-slashing gesture, turns around, and walks out.

Now he comes in here a couple of times a week, banging loudly on the display case, growling at customers, stuff like that. I even offered to show him how to make his own muffins once. He made fun of me and asked me if I knew of any other bears that could cook. I don’t know…he’s a great mascot…just a shitty customer.”
Posted by Clambaker at 8:57 PM