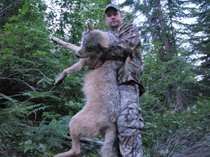 Dayton, WA
It was the trip hunter Eric Driggs and his faithful German Shepherd, Largent, had been waiting for all year. Two weeks of camping and tracking in the Blue Mountains in pursuit of some big game. He had high hopes of coming home with at least one bear and one elk. But that was not the case.

Two weeks prior, Eric and his dog had ventured into the wild to set up camp. The first week offered nothing but bad weather and there was no game to be found. "It fucking sucked," noted Eric. "I didn't come out here to go camping and discover nature, I came here to kill."

By the time the second week was coming to a close, things were looking pretty dim. "I was getting pretty pissed. I had a shit pile of ammo I needed to light off." It was finally on the last day of the trip that things started to pick up. A large bull elk had wandered in close to Eric's camp. As he sat behind the tree waiting to take a good shot, Largent came running out of nowhere and scared the animal away. It was at that point Eric realized what he needed to do. "I've had that dog for a long time," he stated, "And what a sweet fucking shot! Right in the neck."

Largent is now on display in Driggs' living room. "I'm not real happy that he's gone," says Eric. "But I think he knew how pissed I was, and how happy he made me that day."