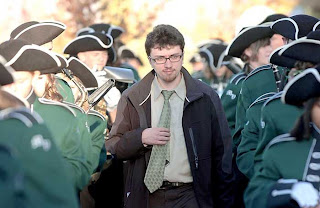 Mt Vernon, WA
The years spent practicing and marching around with Mt Vernon's Revolutionary Band Corps have finally paid off for one lucky oboist. Brett Davis was made honorary review-man in last weeks Berry Parade, topping off a journey that started when he was 11 years old.

The job of the review-man is to patrol through the ranks before the ceremony, ensuring everyone is in proper uniform and in tune. "It was the sh*t!" Brett exclaimed. "I finally got to correct everybody on all the mistakes with their uniforms. I mean some of these guys are f*@king idiots. Did you see that crease in Ricky's pantaloons? No...of course you didn't. That's why you're a reporter and I'm a review man. Completely unacceptable."

It wasn't all great for everyone though. Grumblings about Brett could be heard through out the Corps. One band member stated, "They only gave it to him because he's such a whiner. He plays the oboe, who the f*@k wants to play an oboe?"

But for this inspired musician, the future couldn't be brighter. "Yeah things are looking good, I'm growing out a goatee, talking to girls, who knows, maybe it's time for me to put out a solo album."
Posted by m.c. razor at 9:00 PM