Boeing workers excited about new opportunities to complain to employer 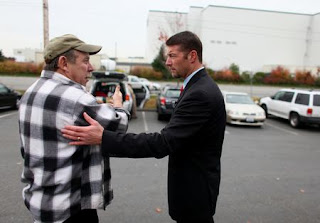 Everett, WA
The news broke yesterday that the new Boeing 787 Dreamliner production line would be based out of South Carolina, and no one could be more happy than the local Boeing machinists.

It's been a year now since the last Boeing strike, and the atmosphere around the factories has been getting stale. After the latest union agreement, most of the demands of the laborists had been met. Some employees were even beginning to think that maybe they had a good job. That all changed yesterday with the latest announcement.

A new cry of outrage spread across the plant floor as production excitedly came to a halt. Boeing had announced the new line would be based on the other side of the country. Of course the main line would still be based in Everett, and everyone's job there would be safe, but tempers over the decision were still hot.

Chris Geist has worked for Boeing for 22 years and has never been this excited about a reason to be outraged at his employer, "I can't wait to start complainin' and hollerin' about this shit. They may have provided me and my family a comfortable life, but this is bullshit! I dare one of those tie wearing, fancy hair-do corporate guys to come into our break room and see what they are doing to these hard working folks."

Machinist worker representative Keith Meyers has been making the rounds with his coworkers keeping spirits high. "I tell these guys about how much bullshit we have to put up with working for this company, and I think it makes a difference. You can really see an attitude adjustment when they get to feel like this company has them by the balls."
Posted by m.c. razor at 12:48 AM