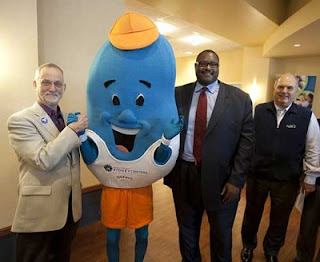 Seattle, WA
The dialysis wing of the Harboview hospital was all abuzz this weekend as they introduced to the public the first of its new mascots to promote awareness. Rocky the Kidney Stone was brought out in front of a team of journalists while the theme from Rocky was playing.

The purpose of the new mascot is to help people become aware of symptoms of kidney failure and to have a good time doing it. Hospital director Tim Barrett was a little aprehensive at first, "I thought the idea of a mascot depicting a serious problem was a bad idea, but when I saw him wearing that little baseball cap I thought, this could work. Now I am really excited about the whole idea. We can't wait to show off the new tumor mascot next month."

Harborview hospital was ranked almost last on the annual list of Most Fun Hospitals. It hopes that with their new program, they can surpass Sacred Heart of Spokane who has led Washington hospitals for the last 5 years with their off road wheelchair track and shooting range.
Posted by m.c. razor at 10:36 PM