Conservatives outraged by new step at Department of Licensing 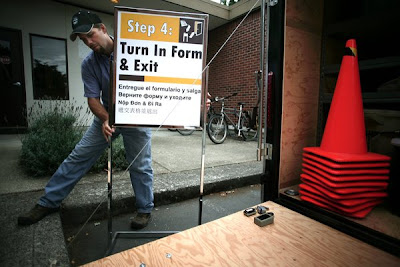 Olympia, WA.
A seemingly innocuous attempt by the Washington State Department of Licensing to streamline the drivers licensing process has met with sharp criticism from local anti-government, conservative groups (who we sane people lovingly refer to as “bat-shit crazy loons.” Yes, conservatives, I said it…you ARE bat-shit crazy fucking loons).

No one has been more surprised at the reaction than DOL Director Sheila Davis. “Honestly, we thought this new step was needed,” said Davis. “With step 3 only directing people to ‘complete the form,' we had a lot of people standing around and asking what to do next. It’s actually worked pretty well. Lines are shorter, and our employees aren’t spending half their time answering stupid questions.”

Davis didn’t hesitate to respond to her critics. “Look, I’ve reached out to these groups,” said Davis. “I asked for their input on a solution. They yelled something about being a socialist, baby-eating fetus killer and hurled a bunch of teabags at me. Okay then. How do you respond to that?”

For local tea partier Cliff “Cock-a-Doodle-Doo” Humphries, the new step in the licensing process is simply another example of government intrusion into the lives of hard-working Americans. “What’s next?” asked Humphries. “Turn in your gun and bend over? Get in line for your government rye? Well I don’t even like rye. These homo communists won’t be happy until they dictate everything in my life. Speed limits, public schooling, light rail, healthcare, fire alarms, building codes that require floors, no smoking at the gas station, no sex with your sister, no beating your dog with the pepper shaker…..fuck them. I may have to turn in my form, but I’ll be god-damned if I’m going to exit.

You ever hear of a little thing called the Constitution? I’ve never read it, but I’d bet you my right pinky toe there’s nothin’ in there about havin’ to turn in forms or exiting. Don’t even get me started on the fact that the bottom part of that sign is written in Spanish. As far as I’m concerned, if you can’t speak American, you deserve to stand around with your completed form wondering what the fuck to do next. Stop taking our jobs and move back to Spainland you dirty Spaniards.”
Posted by Clambaker at 7:30 AM