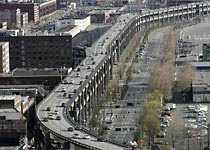 Seattle, WA
Seattle mayoral candidate Mike McGinn said Thursday that Seattle taxpayers should be able to vote on the new viaduct decision, and they should vote on his new option. In front of a crowd of reporters, McGinn laid out his plan which combines the awesomeness of a tunnel with the bargain price of a rebuild. He calls it Project Voltron.

With this third option, the viaduct would remain in place, and still be covered by a tunnel. McGinn is so pumped about this option that during the press conference he often took his shirt off to flex. "Think about it, the railroad industry has been doing it forever. I don't hear any complaints from them about above ground tunnels." he said.

He went on to say this is the kind of architecture that will put Seattle on the map and bring us into the 21st century. He then acknowledged that Seattle is already on most maps and is currently in the 21st century.
Posted by m.c. razor at 9:35 PM