Pumpkin-carving out, Pumpkin-hammering in for local special education students 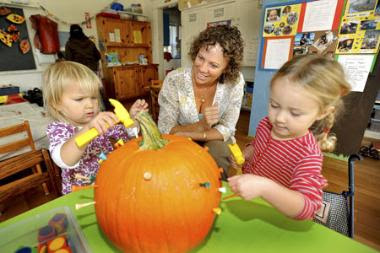 Kingston, WA.
For many of us, the fall season means cooler temperatures, beautiful foliage, Halloween, getting drunk, and of course…pumpkin-carving.

Not so in Kingston, where Lisa Beasley’s special education students have created a whole new twist on this age-old pastime. The switch was made, in part, due to a less-than-successful pumpkin-carving session in 2008.

“We tried the pumpkin-carving thing last year,” said Beasley. “In retrospect, 14 retarded children running around with knives shouldn’t have seemed like a good idea…I mean ‘duh,’ right? We lost a few eyes, some hair, and had to deal with some pretty significant scarring. I mean poor little Albert over there looks like he got kicked in the face by a donkey, and now his left eye-brow won’t grow back. Anyways, they really don’t know the difference. Carving, hammering, reading, zebras, mommy, toast, pointy, Canada, the sun ….those are all the same things to them.”

Watching 3 year old Jaime Ferris flail away wildly at the class pumpkin, you wouldn’t take her for a first-time pumpkin hammerer. She guides each blow with almost machine-like precision, as if possessed by some innate force of nature, driving her plastic hammer further into its target with each swing.