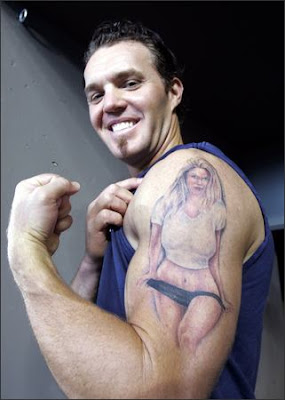 This photo comes to Clambaker courtesy of M.C. Razor, who knew he would like it. Thank you M.C. Razor...thank you.

Clambaker doesn’t like you. Clambaker never liked you. Now you’ve gone and really pissed Clambaker off.

Oh my…where to begin. We have to start somewhere. Maybe we should start with your soul patch? You’ve grown it. Good work! I applaud you! You’ve gone and installed a landing strip on your chin. Follow the lights to your douche-hole. A little wispy on the soul side though… more patchy than souly…

And now we come to what I surmise is the whole purpose of this entertaining photo…that lovely new ink on your arm. Ugh. I have some questions about that. You know what you’re missing in life? Friends. Here’s a scenario for you. Let’s say Clambaker is out late on a Friday night. Let’s say Clambaker has had too much to drink. Let’s say Clambaker throws out the idea of getting his arm adorned with a busty blonde provocatively removing her panties. Here’s where you and Clambaker take different paths.

Clambaker has friends. Not many mind you, but enough of them to say, “no Clambaker! That is NOT a good idea! Do not do that! Re-think, Clambaker, re-think!”

But nooooooo. You didn’t have this safety net. If you did, they wouldn’t have let this happen. Even if they had, at the very least, when the newspaper came to take this photo, they would have said, “No Scott! You’ll look like a douchebag! Whatever you do, wear sleeves!”

We’re disappointed Scott. Until we saw this picture, the Washington Apple had zero people on our douchelist. Actually, we didn’t even have a douchelist. Well now we do. And you sir, are its inaugural member. I congratulate you. You should congratulate yourself. Jerk off an extra time this morning, friend…you’ve earned it.

Your move Mr. Spiezio.
Posted by Clambaker at 11:42 AM