Mariners disappointed to find out they finished in third place 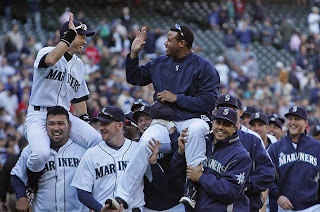 Seattle, WA
The end of the Seattle Mariners' 2009 season was a roller coaster of emotions. The final game of the 162 game year was this Sunday with the M's winning 85 of them. The final game of the year ended in victory as the players celebrated in fashion with hugs, hi-fives, and thrusting players up on their shoulders.

The celebration was short lived though on arrival of the club house locker room. Apparently the players were told by their new manager, Don Wakamatsu, that if they win the last game they get to play in the World Series. Wakamatsu was not in the locker room after the game, but instead left a note that simply said, "Sorry guys, you only got third place out of four places. No World Series. Enjoy the winter."

The baseball team may have finished next to last in the standings, but they were number one in team chemistry.