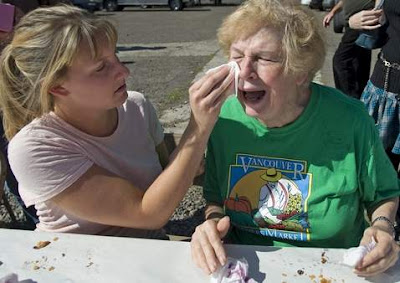 Vancouver, WA.
Like many residents at Vancouver’s Greener Pastures senior retirement community, Alice Menkin doesn’t rate turnips as one of her favorite foods. As she struggled to finish her lunch of mashed turnips and turnipsauce, she failed in her attempt to hold back her tears.

“This is not very tasty at all,” cried Menkin. "This is the opposite of tasty. Is untasty a word? If it is, then that’s how I would describe this. Definitely very untasty...and especially undelicious.”

Apparently the switch to the ill-received turnip-based menu has been in the works for some time. For staff, the final straw came Sunday morning, after a second serving of applesauce had been awarded to residents for an unusually productive “sit still and be quiet” hour. The trouble evidently began during the early morning hours, sometime after the final “lights out/take your medicine” call had been sounded over the PA system.

“We came in Sunday morning to a fucking war zone,” said director Darrell Schaefer. “They broke into the activities room and ravaged the Murder, She Wrote DVD library. They watched so many episodes that Angela Lansbury’s face is burned into the fucking display. I shit you not. We still can’t find season 4. God only knows where that went.

Listen, they're just trying to get to you with all the crying. 'Whaaa whaaaa' this and 'boo hoo' that. They cry all the fucking time now, much more than before. But don’t let these old bastards fool you. They’re a lot more wily than you think. Look, turnipsauce is much lower in sugar than applesauce. It’s simple math. Less sugar equals less tomfoolery, and even fewer shenanigans.

Besides, you know what they say, how when life gives you lemons, you make lemonade? Well now they’ve got turnips…maybe they’ll make some fucking turnipade...you never know.“
Posted by Clambaker at 8:21 PM