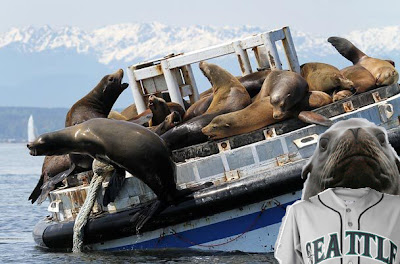 Seattle, WA
The faint glimmer of hope that is not being the perennial worst team in baseball has been creeping ever so slowly back into the lives of Seattle Mariners fans.  If you are among those considering climbing aboard the bandwagon and enjoying a long-awaited summer of down to the wire playoff battles, and you're also a sea lion, you'd better look somewhere else, because you may have already been left behind.
While human attendance levels at Safeco Field continue a record-breaking plummet to depths previously known only to residents of the legendary and much-storied lingcod city, many local sea lions have taken to our resurgent, scrappy band of hometown baseballers like a fish to water, or a cat to a fish, or a Swede to stupid, or a baby to electrical outlets…(jesus, this article is awful…apologies…maybe it’ll get better…I hope for your sake that it does…)
For fan Horace C. Lyon, the Mariners’ long, slow road back to possible contention has been a godsend.  “Oh man…I’ve been a fan since I was a pup,” said Horace.  “When I was growing up in the old Ballard locks, my brother Whiskers and I were the biggest Mariners fans.  I loved Chris Bosio.  There was just something about him…”

While he certainly shares his brother’s enthusiasm for his favorite team, Whiskers C. Lyon's passion is less directed toward pitching and more toward the defensive side of the diamond. “Yeah, I know Horace was a huge Bosio fan, but it's speed and defense that win championships.  You need outfielders who can run and catch. I was so into Henry Cotto for the longest time.  He had speed and boy could he play defense.  And he had speed too." 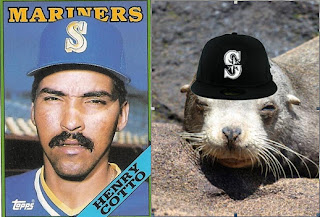 While they might disagree on their favorite all-time Mariner, there is no doubt the two brothers see eye to eye on one thing - a potentially fun summer, and a bright future for Mariners fans.  "You never know," said Horace. "The pitching's been carrying to team up to this point, for sure.  The offense has to get better. And I know, there are a ton of questions to be answered. What's wrong with Chone Figgins? Where is Jack Cust's power? Can a bullpen of nobodies keep fooling the rest of the American League? Do we make a play for a couple of bats at the trade deadline? It's going to be a wild ride."
With a simple and deliberate nod in Horace's direction, Whiskers demonstrates his solidarity and agreement with his brother. "In Z we trust," said Whiskers. "Go Mariners!"