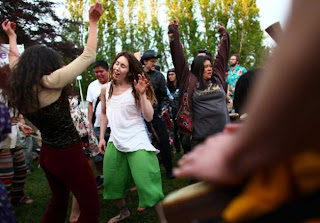 You may have been downtown this weekend and noticed the smell of Olympia in the air. Which only means one thing, the NW Folklife festival is on. Every Memorial Day weekend, thousands of young and unemployed make their pilgrimage to the Seattle Center for a weekend of dancing, drugs, and defecation on public grounds. The Folklife Festival was originally formed to showcase the talent of the many cultures in the region, but over the years it has been the so called talent of our local culture that has provided the bulk of entertainment for on lookers.

The weekend usually ends peacefully with nothing more than a few grass stained knees, but this year it almost turned ugly. As the sun started to break through on a calm Monday afternoon, the piroshky booth suddenly found themselves out of veggie pastries. As the news spread around the grounds to the hungry dancers, a heavy unease fell around the place. Many families began to exit as word of a protest was forming.

Seattle Police quickly stepped in with their latest development in riot control, a ten man drum circle. The team was able to subdue the mob long enough to make them forget what they were upset about, and the weekend ended as peacefully as it started.
Posted by m.c. razor at 8:17 PM