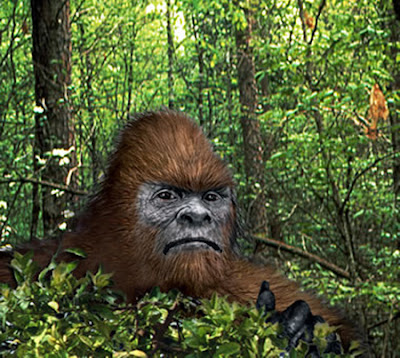 Hello Washington.  Squatch here.  Squatch sad.  Squatch kinda surprised to open www.seattlepi.com on iPad 2 today and read distrurbing article about self.
Washington…why only 4 out of 10 of you believe in Squatch?  (Squatch take timeout from article now…Squatch’s favorite Mariner Carlos Peguero hit home run…Squatch excited…where Mariner bats been?  Squatch start to think maybe people find Squatch before Mariners find bats…)
Anyway…Squatch remember when Washington loved Squatch!  Now Squatch think he maybe move to up and coming state like Oregon……..haha…who Squatch kidding…Squatch probably stay here.
Squatch think long and hard about which online publication to reveal self in.  Seattle Times? Too absorbed with self.  Plus Squatch think Geoff Baker terrible and should move back to Toronto.  KOMO online? Please…even Squatch done with them.  USS Mariner?  Maybe, but Dave Cameron even seem too busy to pay attention to Squatch anymore.
Squatch settled on only real choice…Washington Apple!  Squatch and Washington Apple staff be friendly for years. Squatch love timely articles and hard hitting questions.  No one ask Squatch, but Squatch LOVE new look and feel too…much cleaner….plus Squatch can “like” on Facebook.  Also…Squatch hate Aplet and Cotlet.
So…Squatch real, Washington…Squatch real…Squatch Washington strong…like viaduct.  Now that Squatch reveals self, Squatch expect Pemco to call….maybe offer Squatch more savings on cave insurance.
BTW – Where LowTide and Radulartooth?  Squatch find it funny he post before them…and Squatch not even on Apple payroll!
Posted by Clambaker at 8:17 PM