Oh, so it's ok for coyotes to play spaceman 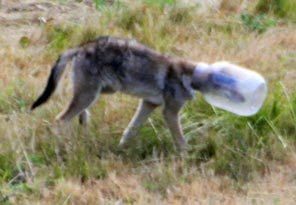 What the hell is wrong with you people? This last week was such a blur of emotions for me as I was forced to follow the news story about a stupid coyote who got caught in my mayonnaise trap. I couldn't believe my eyes! People felt bad for the thing. Well nobody felt bad for me last week when my head was stuck in a mayonnaise jar, for 5 days!

The wildlife agents were scared to hit it with tranquilizer in fear that it could die from being so thirsty. Come on, I got shot like 20 times. I was wandering around the neighborhood looking for help and people kept shooting me. Mostly bb's I think, but I could swear I saw some wildlife agents high fiving each other right before I got sleepy.

And then some couple tackles it to remove the jar, then lets it go! They didn't kick it in the ribs or pull its shirt up over its head or try to fart in the jar. Why do people like coyotes more than they like me? Is it because I don't break into their chicken coop and eat their hens? Because I will totally do that.

There is a lesson to this story though. If you see a coyote in a mayonnaise jar, just let him be. He's the lucky one.
State wildlife officials kill 2 coyotes in Lake Forest Park
Posted by m.c. razor at 8:46 PM