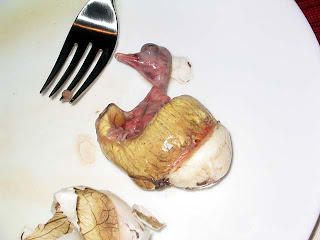 Well as you can see, this is all that remains from my duck farm venture. One final piece of balut rests on my plate as I ponder things gone wrong and lessons learned from them. With each crunch of his tiny bones, a memory of the paths I chose and decisions made. But not all was bad, I made great friends and many lessons were learned. Things like duck rape is real.

But I can't say how great it is to be back in Washington State and even better to be back bringing the news to the people. After being gone so long, it is nice to look around and notice the changes that have been made over the last year. Some of it possibly at the requests and demands of our loyal patrons. I think it shows that when we all band together, how powerful a voice can be.

Take for instance the new tunnel along the rebuilt seawall. Two years ago there was only idle talk of whether or not to even build such a tunnel. Now, the downtown waterfront is truly a gem in the Emerald State. And to see packed car after packed car of people riding the Light Rail, lets me know we have the planning and foresight necessary to move forward. I never would have thought so many people commuted from Tukwila to the neighborhood of Othello. But then again, I never even knew of Othello.

I'm excited for a return to breaking news stories and in depth journalism to keep the public abreast of all things that is The Washington Apple.
Posted by m.c. razor at 4:57 PM