State-Off #3 – The State of Washington vs. the Commonwealth of Virginia 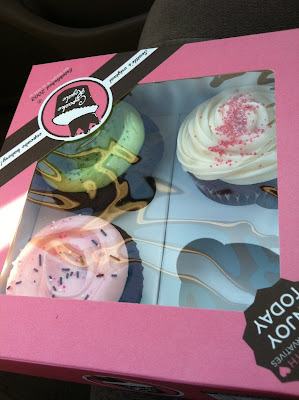 Some staff members, who shall remain nameless, even get greedy from time to time and dig in to their cupcakes without asking the other staff members which cupcake they would like first. They just dig in and take the chocolate cupcake with mint frosting and pretend like it was their cupcake all along. They are selfish and do not ask the other staff members which cupcake they might like to enjoy. No…they just leave the other staff members to choose between a red velvet and chocolate cupcake with pink frosting. You probably have someone like this staff member at your place of employment too. From now on I will eat my cupcake before the staff meeting, and this nameless staff member will have to choose between the remaining cupcakes that I was less interested in tasting.
You might think that as co-CEO and founder of the Washington Apple, I might be hesitant to leave town on assignment and leave my most cherished work in the hands of the likes of MC Razor, LowTide, and Radulartooth. You would be right! A Washington Apple without Clambaker is like the Puyallup Fair without a rabbit barn, or Seafair without a drunken frat boy on a log boom, or a Swede who is able to read and/or manipulate small objects with their fingers! But unlike the Swedes, the Washington Apple staff has done an outstanding job while I was out and they deserve a big pat on the back…but no cupcakes.
Sidenote: you know what you should be thankful for? That I flunked out of the train-driving academy. “No Clambaker! You must stay on the tracks! That is all you have to do! It is of the utmost importance that you stay on these little metal rails!”
I came to a realization a couple of weeks ago: if the Washington Apple is to truly and fairly compare the great State of Washington to the other 49 states, we must be prepared to get our hands dirty and do a little up-close-and-personal research into our friendly neighbor states.
You know a good state to get your hands dirty and do research in? The great Commonwealth of Virginia!
If you’re like me, and let’s be honest, you probably aren’t, but if you were, you would probably have some pre-conceived notions about a place before you traveled there. For example, if you were about to visit Texas, you might start to envision cowboys, republicans, intolerance, incest…stuff like that. Well before I went and visited Virginia, I thought about bedbugs. That’s what I thought about Virginia…”I hope I don’t get bedbugs!”
Let’s get ready to RUMMMMMMMMMMMMMBLE!
State vs. Commonwealth
There are 50 states in the United States of America. Four of these states, Massachusetts, Pennsylvania, Kentucky and Virginia, in addition to being states, also refer to themselves as “Commonwealths.” You are probably asking, “well what in the holy hell is a Commonwealth? What’s the difference? Learn me somethin’ Clambaker!”  Nothing! There is no difference! Back when the early seeds of revolution were sprouting in the colonies, these commonwealths wanted to illustrate that they were not governed by tyrants, so they called themselves “Commonwealths.” When they finally got around to calling them states, these 4 pretentious assholes decided that in addition to being called a state, they were going to keep the name “Commonwealth.”  Well, except Kentucky, which wasn’t even around. But we’ll save them for another time. (Commonwealth envy anyone??)
Have you ever seen a person walking down the street with their shoes untied? I mean intentionally untied!!! Why would they do that?? I spent a lot of time as a little kid learning how to tie my shoe laces. “Chase the rabbit around the tree, something something something”…done! These people did too. But they think by purposefully not tying their shoes, they are thumbing their noses at conventional wisdom, and maybe even society itself. The 4 commonwealths are the asshole states who refuse to tie their shoes.
Let’s imagine you were all set to attend a dinner party. At this dinner party were all 50 states. You show up. You mingle. You begin meeting all of the states. 46 of the states are standing around, drinking beer, laughing, having a good time.
Over in the corner, you notice Massachusetts, Pennsylvania, Kentucky and Virginia, huddled together. Instead of beer, they have champagne flutes. They are all wearing tuxedos…….and monocles. You approach.
You (seeing the state of Virginia): Hi! I’m honored to meet the great state of Virginia!
Virginia: I beg your pardon, but it’s “Commonwealth” of Virginia.
You: Excuse me?
Virginia: Technically, I’m a Commonwealth.
You: Oh…my apologies.
Virginia: It is surely not a big deal (rolling eyes at other 3 Commonwealths).
You: …………….
Massachusetts (to you): Don’t you have somewhere else to be?
Kentucky (to you): In all honestly, it would be better if……
Pennsylvania (to Kentucky): Oh shut the fuck up Kentucky! I don’t even know why you’re here! For the love of God, you thought this champagne was something called “bubble whiskey!”
You: (walks away)
Winner: Washington. We tie our shoes, thank you very much! It makes ‘em good for walkin’ in!
State Slogan
Washington
The official state slogan of Washington is………………….."SayWA.” 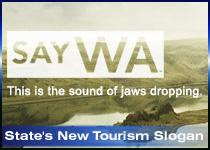 I don’t know about you, but I think SayWA pretty much captures everything there is to say about the pure majesty that is Washington state. According to the Washington state tourism office,
“SayWA is a distillation of the sense of wonder that comes with discovery. It describes the moment when an experience becomes emotional. Where the traveler is no longer an observer, but a participant. The SayWA moment."
That’s exactly right! I couldn’t have said it better myself. If you come to visit Washington, you should create a SayWA checklist for yourself, just to make sure you stay on track:
1. Wonder
2. Discover
3. Experience
4. Get emotional
5. DO NOT OBSERVE!
5. Learn to count, foreigner! You already did step 5!
6. Participate
7. Repeat steps 1-6. (Skip step 7 the second time around)
8. Go home!
9. Don’t you even think about moving here!

Virginia
I was going to tell you Virginia’s state slogan, but then I realized that they’d probably prefer that I refer to it as Virginia’s “Commonwealth” slogan.
Virginia’s Commonwealth slogan is, “Virginia is for lovers.” 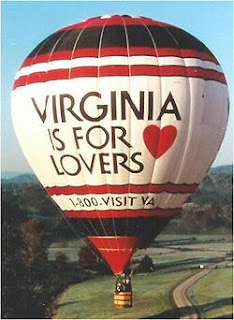 Awwwwwwwww…that’s pretty nice…at least at first glance. Sure, Virginia is fine for lovers. It’s all well and good if Virginia is for lovers of flowers, beaches, candy, rainbows, kites, peanut butter and jelly, lollipops, ham, and ham lollipops and peanut butter kites.
But what if I’d LOVE to train giant sea turtles to fight each other to the death with fire pokers in an underwater octagon? Am I still welcome in Virginia? Hmmmmmmm? You see the problem here?
Winner: Washington. First rule of state slogans: be specific.
State Ship
Washington 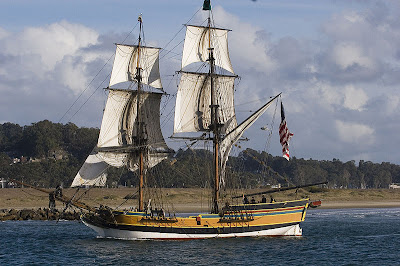 As you learned in this previous Washington Apple post, the state ship of Washington is the Lady Washington, a 90-ton merchant sloop capable of raining fire and devastation down on anyone who dare stand in her path. When the state of California refused to let our Lady Washington use their sunny moorings for winter moorage, the Lady Washington blasted her way into San Francisco Bay and took Californians Clint Eastwood and Betty White hostage and forced them to breed a super-human offspring who we could take back to Washington and who would usher in a new era of prosperity in Washington state. 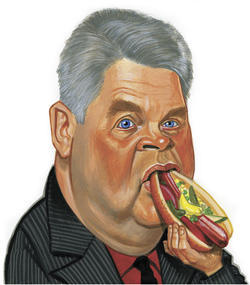 That offspring was Greg Nickels. The experiment did not go according to plan. He was captured and re-located to West Seattle, so that he might live out the rest of his days in peace.
Virginia
Chesapeake Bay Deadrise 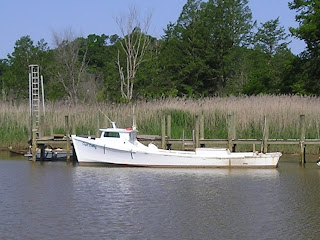 This is a type of traditional fishing boat used in Chesapeake Bay. That’s what it is. There’s an old Makah joke that my grandfather used to tell me when I was a boy…”You know what they call a Chesapeake Bay Deadrise in the Straight of Juan De Fuca?..................Orca food.”
Winner: Come on…
State Bird
Northen Cardinal vs. American Goldfinch 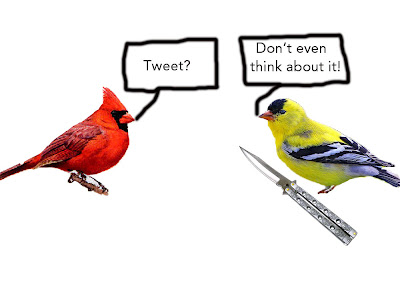 Final: 4-0
After defeating two states in a row, I’ll bet you were curious how Washington would fair against a commonwealth. Well you shouldn’t have been! Haven’t you ever heard the expression, “curiosity killed the cat?” What are you? Some kind of smart, curious kitty that can read blogs? If so, why aren’t you reading a blog about catnip?
- Clambaker
Posted by Clambaker at 4:34 PM