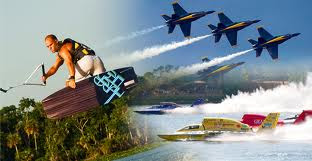 Well, it looks like another year of Seafair has come and gone. The hydros have raced out of town, the Blue Angels have flown, and the Torchlight has been extinguished. And as in any Seafair year, this year can be summed up in one word, Dumb.

Seafair started in 1950, and according to their website, helped put Seattle on the map. That's just dumb. Seattle was already on every map by 1950. I have a map from 1920 and Seattle is on it. Seattle was settled in 1851. And why would mapmakers take particular interest in a city's festivals during their job? I would think they would be more concerned with geography than boat races.

Seafair has hardly changed in 60 years, but some old people will tell you about two major differences. For one, they never had to close down a major interstate for some airplanes. Imagine that, closing down a national highway and a limited thoroughfare for something that is in the sky. The other change is they no longer have the synchronized swimming exposition in Greenlake, but I think we all know why.

So here we are in 2011 still doing the same dumb shit. A parade, which somehow still draws a crowd. A few high school marching bands, old ladies that have a dance club from whatever their heritage is, and the Grand Marshall game show host Drew Carey sitting in a car. It sounds like a fucked up dream that I am glad I have never had.

And can anybody tell me the winner of the hydro race this year? How many boat sponsors can you name? I can name more WNBA teams than hydroplane boats.

It's ok to have Seafair, it's a weekend of party boats on the lake, I get it. But don't try to sell it as a community event. That's dumb. It's exactly what it says it is. The Puyallup Fair on water.