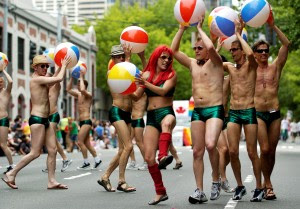 Seattle, WA
For the second day in a row, protesters have gathered atop the Alaskan Way viaduct in downtown Seattle causing massive traffic delays. They have gathered there claiming they are the 99% who do not want a tunnel to be dug.
Someone claiming to be the leader read a statement to Cindi Rinehart today on Northwest Afternoon. "Our demand here is to be taken very serious. We demand the mainstream media, such as CNN and The Washington Apple, acknowledge that only the 1% of people are making the decision that we will have to run the St Pattys day dash on surface streets. Also, we want to save the Ballard Denny's."
Posted by m.c. razor at 5:54 PM