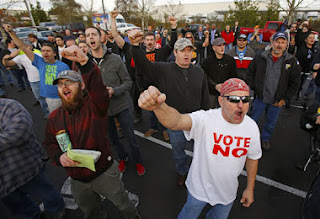 Amped up on 24 oz cans of iced tea, Boeing union workers took the afternoon off to shout about things in the parking lot. This recent activity stems from the announcement that Boeing plans to build 100 new 777 jets. It is now up to the union workers to vote on whether or not they like this new plan. The deal would keep the machinists busy for at least two years, and for some that might be too much. "I've got big summer plans next year of riding to Sturgis." says Ken "Shades" McGrady who showed up to the rally in his famous Vote No t-shirt. "I wear this shirt to let other people know how they should vote" he says, "Voting No gets shit done!"
Posted by m.c. razor at 6:27 AM