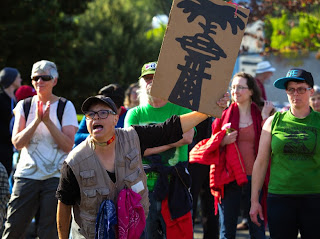 Seattle, WA
It read like a Hollywood script, a small group of intellectuals forced to take on an industry giant to save Planet Earth from total destruction. But that is exactly what happened last week in the waters of Puget Sound. To most of us, the Shell oil rig that docked in Seattle was just one of a thousand rigs working around the world. But to the more learned audience, this particular rig means disaster. According to "Junebug", this rig has the capabilities of drilling oil on the moon and piping it back to Earth which then carries the potential of a space spill. "Imagine if every airplane in the sky was dumping oil or some byproduct into the atmosphere, that is what it would be like." she explained.
The protesters united for battle on the sea with their kayaks aligned like the cavalry of Genghis Khan. Shell Oil in it's 100 year history had never experienced anything of this magnitude.While most people were busy at work, this small group of underdogs had dismantled the 4th largest company in the world. As of yesterday, Shell Oil had closed the doors on it's headquarters one last time. 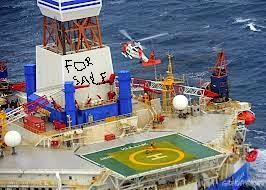